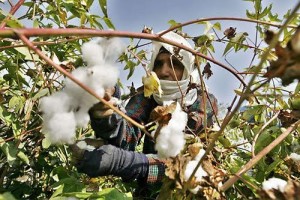 The head of Mali’s state-owned textile development company, CMDT, announced recently that Mali’s target cotton production is 800,000 tons by 2018 but lack of rain threatens to prevent Mali reaching its cotton production target in 2015/16.

Ousmane Traore, a technical adviser in charge of agricultural production said that “the rains have not arrived this year. It’s not even raining a bit and the farmers can’t sow”

“If things remain as they are until the end of June the forecast for this season will be compromised. But if the rains start from this week, given that the planting season lasts till July 20, the season might still work out.”

In the absence of irrigation, farmers are wholly subjected to the whims of the weather. And in the case of Mali’s relatively poor rural economy, that doesn’t just affect cotton exports.

In Mali, cotton is indelibly tied to food. “Something that’s really critical to understand about cotton production in Mali is that it’s very much a holistic production system that also guarantees food security,” said Victoria Crandall, soft commodities analyst at Ecobank.

“Malian farmers typically plant one-third of their acreage with cotton, and two-thirds with staple grains” like maize or millet.

Mali’s cotton season runs from April and includes a growing phase from around May to October and a harvesting and sales period from roughly November to March. The country has more than 3.5 million cotton farmers and 17 processing factories.