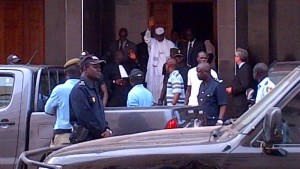 The trial in Senegal of Chad’s former dictator Hissène Habré has been adjourned until September so that court-appointed lawyers can prepare his defense against charges of crimes against humanity, war crimes and torture.

The Extraordinary African Chambers, established by Senegal and the African Union, is trying Habre for war crimes and torture during his blood-soaked reign, but he has refused to recognize what he brands an illegitimate tribunal.

Prison guards brought Habre, dressed in a white robe and turban, into the special court in the Senegalese capital Dakar for the second day Tuesday but the 72-year-old refused to speak, and the court appointed three attorneys to defend him after Habre refused legal representation.

Habre then rose and gave a clenched-fist salute and V-for-victory sign to his supporters, who shouted “Allah akbar” (God is greatest).

The court known as the Extraordinary African Chambers then adjourned the trial until September 7 to give the lawyers time to prepare their defense pleas.

Human Rights Watch said victims were dismayed by the adjournment but that it was only a small setback in the 25-year fight for justice.

“The victims are of course very disappointed by the adjournment but they have been fighting to bring this case to court for 25 years, and 45 more days will not change anything in their long march towards justice,” said Reed Brody, counsel for Human Rights Watch who has been working with Habre’s victims since 1999.

“Although Hissene Habre’s government sent thousands of people to prison without a trial or even a lawyer, it is only proper for a trial held in the name of justice that Habre himself be defended as best as possible.”

Human Rights groups say 40,000 Chadians were killed under a regime of brutal repression of opponents and rival ethnic groups perceived as a threat to Habre’s grip on the Sahel nation.