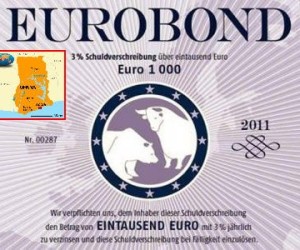 Ghana wants to issue a Eurobond of up to $1.5 billion by September for debt financing and budget support, deputy finance minister Cassiel Ato Forson said on Tuesday.

The official said the new Eurobond had been approved by the International Monetary Fund.

Ghana’s finance minister Seth Terkper has presented a reviewed 2015 budget including the larger Eurobond to parliament on Tuesday.

He also reported to the Parliament on the first five months of government’s implementation of the 2015 budget.

This follows the government’s attempts to manage a rather difficult situation amidst falls in global crude oil prices which forced government to readjust it for the year under review.

Seth Terkper asserted that the Eurobond inflows as well the cocoa loan syndication would help the Cedi to stabilize. Cedi has depreciated against the dollar by about 30 percent this year alone.

In February 2015, the government secured US$918 million deal from the IMF to help turn around the country’s ailing economy by helping to stabilize the cedi and reduce the fiscal deficit.

Recently, the Bank of Ghana assured that it will inject $20 million a day to help revive the local currency.

The government of the cocoa, gold and oil-producing West African nation had planned to issue the $1 billion Eurobond by the end of June, but pushed back the project to September.

The country issued its first 10-year Eurobond seven years ago.