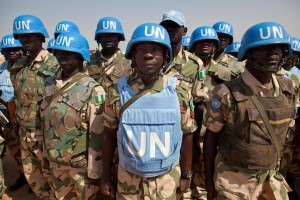 A Rwandan UN peacekeeper in the Central African Republic has shot dead four of his colleagues and wounded eight others at their base before being gunned down, the Rwandan Defense Ministry has said. The shooting happened at the Rwandan contingent’s base in the capital Bangui and the reasons for the violence remain unknown, said a CAR military officer on condition of anonymity. A Rwandan military spokesman called the incident “deplorable”.

“Investigations have immediately commenced to establish the motive behind this deplorable shooting,” spokesman Brigadier General Joseph Nzabamwita said. “We suspect terrorism, without ruling out mental illness as the cause.”

The statement said the injured soldiers had immediately been transported to a hospital in Bangui for treatment.

Known by its French acronym of MINUSCA, the mission was deployed last year following interreligious clashes that claimed thousands of lives.

Central African Republic descended into chaos in March 2013 when predominantly Muslim Seleka rebels seized power, triggering reprisals by “anti-balaka” Christian militias who drove tens of thousands of Muslims from the south in a de facto partition.