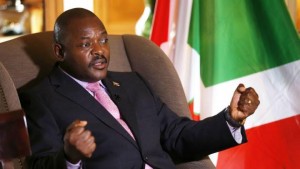 The President of Burundi will be sworn in this Thursday, a week earlier than expected. The president’s office announced the surprise ceremony early Thursday.

The president’s bid for a third term sparked a political crisis that was intensified when he won the July 21 election in a ballot that has been criticized as flawed. Opposition groups boycotted the vote, saying the prevailing conditions were not conducive for free, fair, transparent and inclusive elections.

In a declaration early Thursday, an opposition grouping in Burundi has called President Pierre Nkurunziza to leave office within the week.

The declaration comes amid rising tensions in the country over the respect or otherwise of a peace agreement which put an end to years of civil war.

The country’s main independent radio stations have been closed since April when unrest began. Since then, around 100 people have died in violence related to election protests. A coup has been attempted and then aborted. Two high profile assassinations have taken place, and another one attempted. Intimidation by groups loyal to the ruling party is on the rise. Opposition supporters are allegedly detained without trial. By day there is an uneasy calm, by night gunfire rings out in Bujumbura.

On Sunday August 16, the African Union released a statement warning of catastrophic risk the situation in Burundi posed for the entire region.

The statement, by AU Commission chief Nkosazana Dlamini-Zuma, came a day after the killing of former military chief Jean Bikomagu.