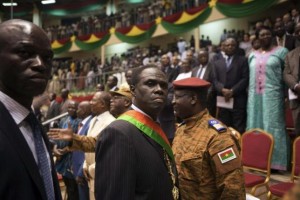 The country is currently being led by an interim government, which is hoping to organize presidential and parliamentary elections.

Many of the candidates for both the legislative and presidential elections come from the political old guard.

Last Tuesday, the constitutional court cited article 166 of the electoral code, which states that “All people having supported an anti-constitutional change damaging the principle of democratic transition, notably the principle of limiting the number of presidential mandates leading to an insurrection or other uprising are ineligible.”

Burkina Faso’s transitional government modified the code in April, to exclude anyone who supported Compaore’s bid to stay in office.

But the top court of the Economic Community of West African States, ECOWAS, the highest appeal tribunal in the region, overruled the modification.

Burkina faso’s constitutional council however says it had based its decision on its own modified national law and not on the decision of the ECOWAS court.

“Burkina Faso has not applied the 13 July 2015 decision by the Ecowas court and as a result article 166 of our electoral code remains in force.”

On Wednesday, Burkina Faso’s Congress for Democracy and Progress party called for a campaign of civil disobedience and a possible election boycott after the constitutional court decision.

The West African nation is scheduled to hold on Oct. 11 the first general elections since protests last year culminated in the removal of President Blaise Compaore.