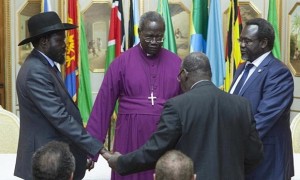 South Sudan’s president Salva Kiir, who has been leading the country since its independence in 2011, signed on Wednesday a peace deal to end a 20-month civil war between his supporters and those of his former vice-president Riek Machar on the background of ethnic conflicts.

The ceremony, which was held in the capital city of South Sudan Juba, was mediated by the Ethiopian Prime Minister and presidents of Kenya and Uganda were there to witness the peace agreement signing between the parties.

Kiir’s sudden change of mind came 7 days after the South Sudanese leader refused to sign the final peace agreement on 17 August, in Addis Ababa, Ethiopia, citing disagreement with many critical provisions in the peace deal.

Speaking to African leaders in Juba during the signing ceremony, President Salva Kir said, “With all those reservations that we have, we will sign this document.”

Before he put pen to paper, however, he made it clear that he saw it more as a first draft of a pact than a durable solution to South Sudan’s bloodshed.

The United States which welcomed President Kiir’s decision “to choose peace and to sign the agreement on the resolution of the conflict in South Sudan, along with other parties who signed previously,” was keen on making it clear that “these signatures represent the full and final approval of the agreement by the warring parties and their commitment.”

“While we support the signing of the agreement, we do not recognize any separate reservations made about the agreement and expect all parties to abide by all elements of the final peace agreement,” the State Department spokesperson John Kirby said Wednesday at his daily briefing.

African nations and the US had exerted extensive pressure on South Sudan to reach a peace agreement with its opposition.

The United Nations gave president Kiir until the end of this week to make up his mind or face a wide range of targeted sanctions including arms embargo on his government.

Washington urged all the parties “to adhere to the permanent ceasefire within the next 72 hours and begin the process of implementing this agreement.”