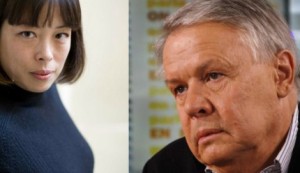 Two French journalists and writers, Eric Laurent and Catherine Graciet, have been arrested on Thursday in Paris and put in custody for blackmail and extortion after they were caught red-handed.

Eric Laurent, 68, is author of a book on the late King Hassan II “Memoires d’un Roi” and co-author with Catherine Graciet of another book on King Mohammed VI.

The two French journalists who had apparently written another negative and hostile book on Morocco tried to extort €3 million from the country’s Head of State if he does not want the compromising book to be published.

Last July, Eric Laurent contacted the Royal Cabinet from Paris to announce that he was about to publish, with Catherine Graciet, a book about Morocco, but that he was ready to shelve the work if the Kingdom accepted his bargain. He requested an appointment to discuss further his plans.

By mid-August, Dupont Moretti, the French lawyer representing the king of Morocco, met Eric Laurent in Paris who demanded the payment of €3 million to cancel the publication of his book. Morocco immediately lodged a complaint with the Paris Prosecutor.

Two other meetings were held between Morocco’s lawyer and the two French journalists who bluntly expounded their blackmail tactics, ignoring that they were being monitored by the police who recorded their conversations and took their pictures.

At the third meeting held on Thursday August 27, the bargain was finalized. The blackmailers accepted to lower their ransom to €2million, received an advance of €80,000 and signed a waiver statement whereby they renounced to publish the book. But the signature attesting to “their guilt, their blackmail and their racket worthy of thugs,” as put by Me Dupont, was more than enough evidence. The two blackmailers were bagged on leaving the restaurant where they had just struck their murky deal, handcuffed and driven to la Brigade de Répression de la Délinquance contre les Personnes (BRDP/ the Office of the Brigade of Crime Repression.)

In a statement to RTL radio after their arrest, Me Dupont Moretti described the whole story as “extremely sordid” and the two journalists’ acts as “extremely serious.” They should be tried for their particularly serious acts “whose geopolitical consequences can be significant,” he said.

“This character (Eric Laurent), which claims to be a journalist and who presents himself as such, has attempted to directly blackmail a Head of State. This is unprecedented. It’s a crazy audacity.”

The attorney who recalled that Morocco is regularly the subject matter of stories, analyses and books whose authors adopt a murky approach, said he had been stunned by the two blackmailers’ behavior and could not understand the mobile behind this blackmail: “Is it venality? Do this man and this woman have been manipulated by a group?”

The same questions and many others are being raised by the two blackmailers’ French colleagues and even French politicians who are trying to understand the “whys” of the indefensible act that goes against the very principles and ethics of a writer and a journalist.

The answer may come out during the two accomplices’ trial that promises to be rich in twists.