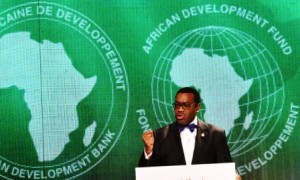 Dr. Akinwumi Adesina, the new boss of the African Development Bank (AfDB) said he will focus his first term on expanding opportunities and unleashing economic potentials for women, youth and the private sector across the continent.

Adesina made the comments in a speech he delivered during his inauguration ceremony on Tuesday in Abidjan as the 8th elected President of the AfDB.

According to him, “while Africa’s economies are growing, inequality is increasing all over our continent. The sparkle in the eyes of the fortunate few is drowned by the sense of exclusion by the majority. Hundreds of millions of people are left behind. Most of them are women and our young people. They do not feel the impact of economic growth in their lives.”

“Our collective challenge is to drive inclusive growth, growth that will lift millions out of poverty. Africa can no longer be content with simply managing poverty. For our future and the future of our children, we must eliminate it,” he added.

The 55-year old former agriculture minister of Nigeria, Africa’s most populous country, is the first Nigerian to be elected to the AfDB board, which includes representatives from African member states as well as foreign donor governments.

He is known as a firm advocate of an economically united and integrated Africa. In his words, “we must integrate Africa – grow together, develop together. Our collective destiny is tied to breaking down the barriers separating us.

“From large to small nations, from countries on the coast to those far inland, from the island states that depend on the blue economy, to states coming out of conflicts with resilience and determination, our aspirations are the same – to deliver quality growth and development and to see all Africans prosper,” he concluded.