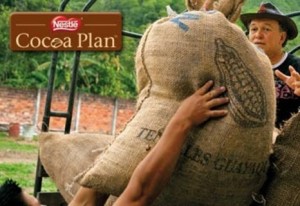 Nestlé plans to source only sustainable cocoa for its global KitKat brand in order to strengthen consumer trust. All KitKat bars will be made with cocoa accredited by independent third parties by the first quarter of 2016, the Switzerland-based company said in a statement Monday. That includes those made in the U.S.

KiKat already uses sustainable cocoa, accredited by third parties, in the US and some other global markets. The brand has been Fairtrade certified in the UK and Ireland since around 2010 and has been expanding its use of certified beans to Canada, Australia, South Africa and throughout Europe.

“We’re delighted to be a flag bearer for the industry, as the first global chocolate brand to announce such a move,” the Head of Confectionery for Nestlé Sandra Martinez stated.

According to him, “Sustainable cocoa sourcing helps safeguard the livelihoods of farming communities and delivers higher quality cocoa beans. This announcement will only strengthen consumer trust in KitKat as a responsible brand.

The initiative, which coincides with KitKat’s 80th birthday, is part of Nestlé’s commitment to source 150,000 tons of sustainably produced cocoa by 2017 via the Nestlé Cocoa Plan, the company said.

The world’s largest food company said its plan aims to improve the lives of cocoa farming communities and the quality of the cocoa Nestlé purchases.

The Swiss firm previously announced its entire confectionery portfolio in The UK would use cocoa from the Nestlé Cocoa Plan by the end of 2015.