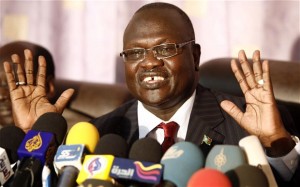 He said that his team will be ratifying the agreement most likely on September 8 but that the cease-fire has not been holding.

The Former Vice-President said it is necessary to implement the cease-fire and to hold a workshop on a permanent cease-fire and security arrangements first, before kicking off the second phase, namely forming the transitional government of national unity.

The south Sudanese rebel leader, who was talking to VOA Sunday, accused government forces of having repeatedly broken the cease-fire. He said he had petitioned mediators and regional leaders about the government’s continuous violation of the peace agreement signed by both parties.

Machar also called on the South Sudanese and the international community to pressure the administration in Juba to ensure a full implementation of the cease-fire agreement.

Machar is expected to become first Vice-President during a three-year transitional period envisaged by the peace deal that aims to end 20 months of conflict in the world’s newest nation.

The conflict erupted in December 2013 after a power struggle between Kiir and Machar, his former deputy. Fighting has reopened ethnic fault lines between Kiir’s Dinka and Machar’s Nuer clan.

Thousands of people have been killed and more than 2.2 million were driven from their homes, many to neighbouring states. Many in the nation of 11 million people depend on food aid to survive.