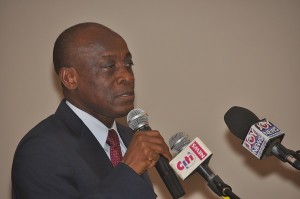 Ghana launched a $1 billion Eurobond on Wednesday at a 10.75 percent coupon rate, Finance Minister Seth Terkper said in a statement.

According to the Finance Minister, Seth Terkper, the 15 year tenure means that Ghana has become the first sub-Saharan African country outside South Africa to successfully issue a 15-year bond.

The bond was 100 percent oversubscribed showing a “high appetite for Ghana’s credit” and a World Bank partial bond guarantee of $400 million enabled Ghana “to borrow on reasonable terms in a rather difficult market,” Terkper said.

On 23 July, 2015, the parliament approved the request by the government to raise $ 1.5 billion from the European Bond Market to support the 2015 budget and refinance domestic and external debts.

US$500 million of the proceeds will be used for liability management while the remaining US$ 1billion will be used to support programs and projects under the 2015 budget.

The country’s total debt stock (GH¢94.5 billion) now represents 70.9 percent of gross domestic product (GDP) which according to a recent review by the IMF that is administering an Extended Credit Facility programme to Ghana, surpassed pre-HIPC levels.

The total public debt in the first half of this year increased by about GH¢15.1 billion up from GH¢79.4 billion in January to GH¢94.5 billion in June.