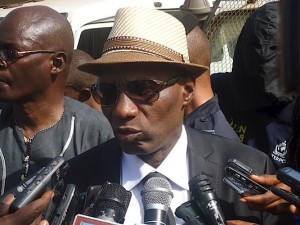 Guinean President Alpha Conde has fired the country’s interior minister and two other government officials for “gross misconduct,” after they failed to handle a deadly violence that broke out last weekend in the West African country.

“President Conde blames his colleagues for the catastrophic event management at Touba”, a popular Muslim pilgrimage site where violence broke out last week, a statement said.

After the events, 13 people have been arrested and are being prosecuted for murder, criminal conspiracy, destruction of private property and intentional injury.

The West African country has a history of religious violence. Last month two people were killed in clashes and at least 33 were wounded.

Some 85 percent of Guinea’s 12 million population are Muslim, about one in 10 are Christians and others follow traditional spiritual beliefs.

Despite being rich in bauxite, the ore used to produce aluminium, Guinea is one of the world poorest countries. It was the first to be affected by a severe outbreak of Ebola, which began in the country’s southern forests in December 2013, and then spread to neighbouring countries.

Half the population lives below the UN poverty line, and according to the World Bank, per capita income in 2014 was just $470 with many lacking access to electricity or running water.