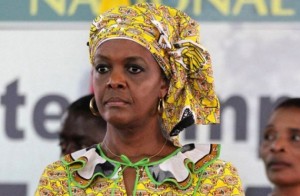 After she fuelled speculation about her possible succession to her husband Robert Mugabe as President of Zimbabwe, First Lady Grace Mugabe said on Thursday that she had no ambitions to be president, although analysts believe she remains a strong candidate for the ruling party.

Mrs Mugabe, a former typist in the Presidential pool, told a supporters’ rally in the Harare township of Mbare that she is not vying any other position than First Lady and that her focus is on leading the women’s wing of Zimbabwe African National Union-Patriotic Front (ZANU-PF.)

She also said that she would support Mugabe when he seeks re-election.

“Some have laughed at me saying Mugabe’s wife must be mad. I said we will put Mr Mugabe in a wheelchair and go for elections,” she told a mass of about 5,000 supporters.

Grace Mugabe, 50, worked as the president’s secretary before marrying him in 1996 and bearing him three children. She formally entered politics in December and became increasingly powerful when the ruling ZANU-PF elected her leader of its women’s league.

Zimbabwe’s next presidential election will be held in 2018.