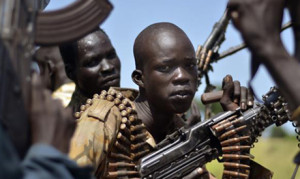 A new report due to be released by a United Nations panel of experts tasked to investigate South Sudan’s civil war has recommend U.N Security Council to impose an arms embargo on the young nation.
According to the panel of experts, despite a peace deal signed by President SalvaKiir and rebel leader Riek Machar in August, human rights violations, including torture, sexual violence, extrajudicial killings and the recruitment of child soldiers, have continued “unabated and with full impunity.”
“There is clear and convincing evidence that the majority of acts of violence committed in the course of the war … has been directed by or undertaken with the knowledge of senior individuals at the highest levels of government and within the opposition,” the report says.
The panel, which has released numerous reports in the past, admitted that South Sudan’s opposition leaders are still in complete control of their armed forces.
The report also asserts that UN’s peacekeepers are “regularly attacked, harassed, detained, intimidated and threatened.” However, the report did not specify who attacked UN soldiers.
If the report is approved by the 15-member UN Security Council, the two leaders [President SalvaKiir and rebel leader Riek Machar] will then be banned from traveling and asset freezes will also be enacted.
Kiir and Machar failed to form a transitional government by January 22nd 2016 deadline.