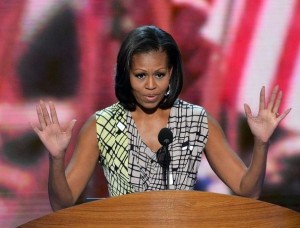 All those expecting that the first lady would tackle issues of development and Africa were kind of disappointed at the end of her speech at the DNC. One would in fact expect that the african-american Michelle Obama, and her half African husband would at least make an allusion at what’s going on in Africa and the Sahel. Maybe we should consider that spin doctors and other k street specialists asked the first lady to focus her message on emotions, demanding that America gives “Barack” four more years. The speech was indeed moving, especially when the first lady said that the President “ knows the American dream because he lived it “. However, we would like to know his stance on the African nightmare that many of us are living right now, due to security issues in the Sahel, humanitarian and hunger crisis in east Africa, pirates in the gulf of Somalia and Guinea, nepotism and dictatorships flourishing elsewhere. It is a matter of principle, because if Barack Obama were the next president of the United States, it would mean that he would be freer to enact his policy towards the underdeveloped world, knowing that his agenda is no longer dependent on re-election, therefore less linked to lobbies. It would also mean that Mr Obama would be in a position to finally tackle great issues such as the peace in the middle east, which is in a deadlock. This is why the speech of the first lady kept a lot of Africans wanting and expecting more from the President of the United States, hoping that he will address their issues when he makes his speech at the DNC. However, we do understand that politics has its codes and that then campaign is a moment where simplification and straight-to-the heart messages are favored, whereas geopolitical issues are left behind. That’s the rule of the game, and how it’s played in Washington.