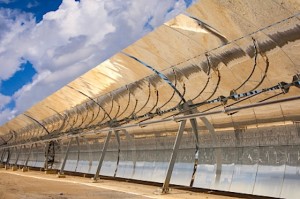 Morocco has received a loan from the African Development Bank to be invested in its renewable energy programs. The 800 million dollar loan will allow the country to develop a Concentrated Solar Power (CSP) plant located in the southern town of Ouarzazate and its Integrated Wind/Hydro and Rural Electrification Program according to a statement released by the bank which has its headquarters in Tunisia.
The loan is part of the African Development Bank’s efforts to encourage and support the development of renewable energy on the continent as it strives to attract private investment in Morocco’s growing wind and solar markets. The loan is therefore under a project of a programme run by the bank to set up infrastructures for renewable energy in five countries (Morocco, Algeria, Tunisia, Egypt and Jordan) which will be able to generate a capacity of almost one gigawatt, the bank said.
The loan will also go a long way in helping Morocco get closer to its dream of increasing installed renewable energy capacity to 42% by 2020 as they aspire to become a renewable energy industry leader. They will be receiving the technical and financial support of the African Development Bank.
The director of Energy, Environment and Climate Change Department at the bank, Hela Cheikhrouhou, confessed that “Morocco has emerged as an early leader in developing low carbon, sustainable energy on a large scale, and we are proud to support their drive. Lessons learned from these projects will inform efforts going forward in the country, region and around the world.”