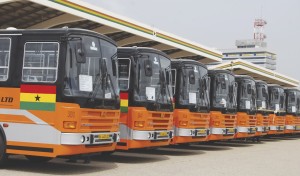 About 53 people died on Wednesday night in Ghana when a bus hit a truck head on some 420 km of the capital Accra.

The accident occurred when a Metro Mass Transit Transport Company’s bus collided with a truck loaded with tomatoes on the Kintampo-Tamale highway.

The cause of the accident is yet to be established, however Regional police Chief Maxwell Atingane said the initial investigations indicated that the Metro Mass Transit bus had brake problems.

Hours after the unfortunate accident, the President of the West African nation tweeted: “Received the sad news of an accident involving a M.M.T Bus on the Kintampo-Tamale road. Condolences to those who have lost loved ones”.

The President also commented on a ferry accident which happened earlier on Wednesday in the Northern Region of the country where a ferry carrying 500 people sunk.

The British government’s representative in Ghana, Jon Benjamin also took to twitter to grieve with the bereaved families and Ghanaians.

“So sad to awaken to the horrific news of so many people lost in last night’s tragic bus crash in the north of Ghana. Sincere condolences.” Benjamin tweeted.