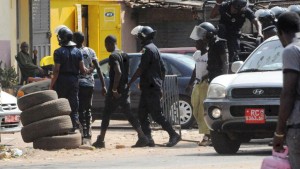 Several trade unionists in Guinea were arrested on Thursday as the ongoing general and indefinite strike launched by trade unions, paralyzed activities in the capital Conakry and other cities.

The unions have been on strike since Monday after failed negotiations between them, management and the government.

Banks, schools, markets and the transport sector in the west-African nation were shut as they all heeded the call from the Union of Workers of Guinea (USTG.)

At least 16 unionists were arrested after clashes erupted in the capital between some youth and commercial vehicle operators.

The workers went on strike to demand, among other claims, salary increases and reduction of oil prices.

They also want the establishment of a National Welfare fund and a compulsory health insurance for civil servants.

During a meeting in Conakry Wednesday, leaders with National Confederation of Workers had appealed for dialogue with authorities after a three-day strike, but the workers rejected the proposal and insisted on the continuation of their protest movement.