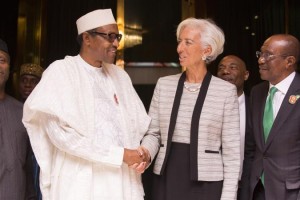 The international monetary fund (IMF) has for the second time cut its growth forecast for Nigeria as the west-African nation faces “substantial challenges” from low crude prices.

The Washington-based lender said in a statement released on Friday that gross domestic product growth would slow to 2.3 percent in 2016 from an estimated 3.2 percent it had forecast earlier this year.

“Key risks to the outlook include lower oil prices, shortfalls in non-oil revenues, a further deterioration in finances of state and local Governments, deepening disruptions in private sector activity due to constraints on access to foreign exchange, and resurgence in security concerns,” IMF said in a statement.

The IMF emphasized the critical need for Nigeria to raise non-oil revenues to ensure fiscal sustainability while maintaining infrastructure and social spending.

The board also urged for a gradual increase in the VAT rate, further improvements in revenue management and a broadening of the tax base.