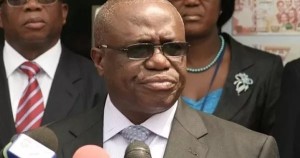 After overseeing one of the most disastrous performances of the local currency, the cedi and the collapse of the hitherto booming national economy, Henry Akpenamawu Kofi Wampah, Ghana’s central bank chief stepped down on Friday.

His resignation comes four months before the end of his term on August 05, 2016.

The outgoing governor has expressed gratitude to players in the financial sector for their cooperation.