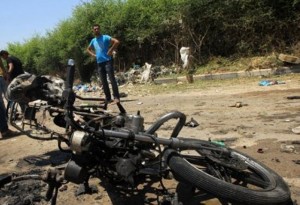 Israel has fired back rockets into the Gaza Strip after Hamas shelled it in retaliation to a previous airstrike. Israel said it aimed “Hamas terror activity sites and terrorist squads responsible for the rocket fire” in its recent attack.
The Palestinian town in the southern Gaza Strip which was at the receiving end of the attack has not reported any casualties but residents of Khan Younis claimed that an Israeli tank fired at the suspected launch area wounded four children, damaged a mosque minaret and a water tower.
Although Israel said that their Sunday airstrike was targeting two Palestinian fighters, Talat Jarbi and Mohammed Maqawi, who were riding a motorcycle near Rafah; the attacked killed only killed one person and injured nine people. Palestinian medical sources said that Jarbi had lost both legs in Sunday’s air strike. The two men are claimed to be part of the “Global Jihadist” groups based in the Gaza Strip. Hamas and the Islamic Jihad group reacted by firing several rockets into Israel a day later.
In a released statement, Hamas’s Ezzedine al-Qassam Brigades armed wing stated that “in response to the injury of civilians in the most recent strike on Rafah, the Qassam Brigades and the al-Quds Brigades fired a number of rockets at enemy military positions,” and Israel has reported only light damages but neither injuries nor deaths from the attack. All of Hamas’s rockets landed in open areas near the Eshkol regional council, Israeli police spokeswoman Luba Samr told news agencies.
470 rockets have been fired from Gaza this year although Israel and Hamas have been abiding by an unwritten ceasefire since Israel attacked the Gaza strip, where the Israeli military offensive named Operation Cast Lead killed more than 1,400 Palestinians and 13 Israelis.