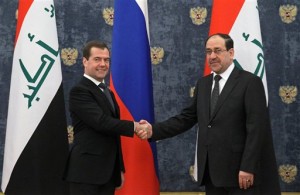 Russia has become Iraq’s second biggest arms-supplier after a document issued at a meeting between Iraqi Prime Minister, Nuri al-Maliki, and Russian Prime Minister, Dmitry Medvedev, showed agreed contracts worth more than $4.2 billion worth of weapons. The deals are believed to have been negotiated during the months of April, July and August when Iraq’s acting defense chief, Saadoun al-Dulaimi, visited Russia.
Details about the agreements are not indicated but reports believe that missiles and helicopters are part of the deals. 30 Mi-28 attack helicopters and 42 Pantsir-S1 surface-to-air missile systems are said to be among items being sold. Further discussions are said to be under way for Iraq eventually to buy MiG-29 jets, heavy armored vehicles and other weaponry.
The new contracts were announced to the public after the prime ministers from the two countries held their close door meeting. Iraq is trying to rebuild and equip its army after the departure of the US troops as attacks from roadside bombings, missile and suicide attacks continue. Before the US-led invasion, Moscow used to be the main supplier of arms to Iraq under Saddam Hussein.
In a released joint statement, it was testified that “the delegation members familiarized themselves with the Russian military production, discussed the technical and commercial options of the offer with Rosoboron export [state] supplier, and signed contracts worth more than $4.2bn.”
It can be recalled that the Iraqi prime minister said earlier on in the week that he doesn’t want Iraq to be “part of someone else’s [arms export] monopoly.” He reiterated that the government will continue to pursue the interest of the state and will “buy weapons based on the needs that we feel we have,” but cited that they “do not want to live surrounded by constant conflict.”