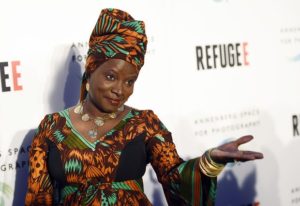 World-renowned musician Angélique Kidjo has been declared winner of Amnesty International’s prestigious Ambassador of Conscience Award for 2016 for her active role in advocating for human rights.

The Grammy-winning musician shares the prize with three African youth activist movements, which show “exceptional courage” standing up to injustice.

“[They] have all proved themselves to be bold advocates for human rights, using their talents to inspire others,” Salil Shetty, Amnesty’s secretary general, said.

The honor known as the Ambassador of Conscience Award has previously gone to world leaders such as Vaclav Havel, Nelson Mandela, and Aung San Suu Kyi, as well as artists Bono, Joan Baez, and Ai Wei Wei.

Grammy-winning artist Angélique Kidjo fled her homeland in the 1980s after being pressured to perform for the country’s repressive regime.

In a 30-year-career spawning 12 albums, she has been a prominent campaigner for freedom of expression and for the education of girls in Africa, as well as against female genital mutilation.

“I have always tried to use my voice -singing and speaking- to fight injustice and inequality. Amnesty International’s work throughout the years has been so courageous and extraordinary that receiving the Ambassador of Conscience award is intimidating to me! The award will energize me to stay outspoken about the crucial human rights issues of our time,” said Kidjo.