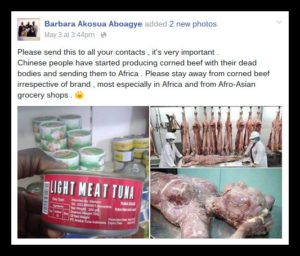 Chinese officials on Thursday refuted claims that China has been selling human meat as corned beef in Africa.

The reaction follows a Facebook post by unnamed Zambian woman living in China, who warned people against consuming corned beef from China.

The woman claimed that Chinese beef companies were collecting dead human bodies, marinating them, packing them in tins labelled as corned beef and sending them to Africa.

Chinese ambassador to Zambia, Yang Youming said in a statement, “Today a local tabloid newspaper is openly spreading a rumor, claiming that the Chinese use human meat to make corned beef and sell it to Africa. This is completely a malicious slandering and vilification which is absolutely unacceptable to us…We hereby express our utmost anger and the strongest condemnation over such an act.”

The envoy asked relevant government departments in Zambia to investigate the tabloid and source of the rumor.

Zambia’s Deputy Defense Minister Christopher Mulenga promised that the government of Zambia will launch investigations into the allegations in order to clear the Chinese people.