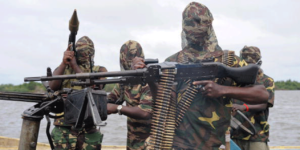 The group said it had issued warning to oil companies to stop ongoing repair works.

This is the first time the avengers are claiming responsibility since June 16.

Nigeria, an OPEC member, which was until recently Africa’s biggest oil producer, relies on crude sales for around 70 percent of national income. Most of its oil comes from the impoverished swampland Delta region.

Militants, whose attacks pushed oil production to 30-year lows in recent weeks, have called for a greater share of the country’s oil wealth to be passed on to the region’s communities and for authorities to clean up areas blighted by oil spills.

The Nigerian government last month launched a $1 billion clean-up operation in Ogoniland, a region of southeastern Nigeria polluted by oil spills, including from Shell.