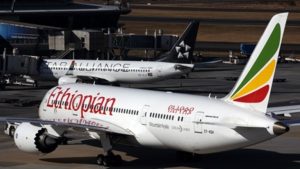 Ethiopian Airlines Enterprise, Africa’s biggest airline, is the frontrunner to set up and manage a new national carrier for Nigeria, Reuters reported.

According to the Chief Executive Officer of Ethiopian Airlines Enterprise, Tewolde GebreMariam, the Addis Ababa-based carrier is among a small group with an interest in establishing the national carrier of Nigeria.

“We do not know the results (of the tender), though we are frontrunners,” Gebremariam told a news conference.

As a reminder, Nigeria, Africa’s most populous nation, has struggled to support a viable home-grown airline for decades, with a succession of carriers collapsing or slashing routes.

In July, Hadi Sirika, minister of state for aviation, unveiled the new national carrier at the Farnborough International Airshow in London. The new airline will be run as a public-private partnership and should become profitable in three years, he had then said.

Posted by Steven Addamah on August 13, 2018. Filed under Business. You can follow any responses to this entry through the RSS 2.0. Both comments and pings are currently closed.