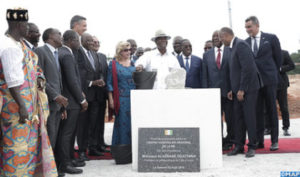 Moroccan company Agentis has started the construction of a new regional hospital in Côte d’Ivoire.

The construction of the new regional hospital (CHR) in Adzopé, 100 km north of Abidjan, was launched by the head of state Alassane Ouattara, who welcomed the construction of this new facility as, he said, it “will fill a significant gap in our health system”.

Agentis CEO, Adil Mesfioui, noted that this project as well as many other ones are part of a mutually beneficial South-South cooperation, as advocated by Morocco’s King Mohammed VI and President Alassane Ouattara.

The new infrastructure will have a capacity for 200 beds and will provide a wide range of services including surgery, paediatric, and obstetrics.

It would be equipped with 3 operating theaters, scanner rooms, 10 dialysis stations, a laboratory and an emergency wing.

The construction of the new CHR is part of an agreement signed between the Moroccan company and the Ivorian government earlier this year. The agreement focuses on the construction and equipment of public hospitals in Côte d’Ivoire for a total amount of nearly $100 million.

In addition to the Adzopé CHR, Agentis will build another CHR in Aboisso and five specialization centers in existing hospitals.

Founded in 2008, Agentis is listed in Casablanca stock exchange.

Posted by Hafid El Fassy on August 7, 2019. Filed under Business, News, Zoom. You can follow any responses to this entry through the RSS 2.0. Both comments and pings are currently closed.