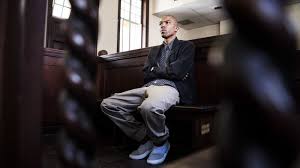 Christmas celebration has started with a great joy in Kanya Cekeshe’s family as he was freed from jail.

The South African student who was jailed for violently protesting against tuition fee increases in 2016 has been released from prison in time to celebrate Christmas with his family, a BBC journalist reported.

Kanya Cekeshe was sentenced to eight years in prison in 2017 for public violence and malicious damage to property. It was during the Fees Must Fall protest that hit South African universities in 2016.

Kanya pleaded guilty to setting a police vehicle on fire during a protest. The South African student recovered his freedom on December 24, thanks to President Cyril Anaphora’s “special remission” order.

Thousands of other prisoners were also freed following the president’s intervention ahead of Christmas.

The release of the activist was welcomed by many human rights organizations, former student activists, members of the clergy and civil society militants, which have been pleading for Cekeshe’s freedom.

In a joint statement issued hours after Cekeshe was released on parole from Leeuwkop prison on Tuesday, the group said it was their contention that it was unfair for Cekeshe to be incarcerated for the past two years, mainly due to the fact that he received poor legal advice.

Posted by Emmanuel Agbenonwossi on December 25, 2019. Filed under Columns, News, Zoom. You can follow any responses to this entry through the RSS 2.0. Both comments and pings are currently closed.