Nigeria: Police on high alert as Shiites react to US killing of Iranian commander 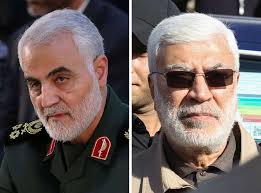 In Nigeria, the Islamic Movement (IMN) or Shiites “has strongly condemned the provocative airstrike”, ordered by US President Donald Trump.

Nigerian Police have been placed on a heightened state since the incident.

The Shia sect in Nigeria, led by the jailed Ibrahim El-Zakzaky, pledges allegiance to Iran.
In a statement released over the weekend and signed by its spokesperson Ibrahim Musa, IMN said it “received the very sad news of the killing of Soleimani. We strongly condemn this provocative air strike ordered by President Trump.”

It added that the US killing of Soleimani is a “declaration of war on Iran, which has now dangerously made the world on the edge of a very destructive war. For quite some time now, President Trump has been looking for ways to drag the Iranian nation to a senseless war.”

IMN vowed that the crime will be avenged by “Hajj Qassem’s brothers, children, and students from resistance men and mujahideen from all the peoples of the world that reject humiliation and submission to the tyrants of this century.”

The Iranian government announced Sunday it would no longer abide by the terms of the 2015 nuclear deal, lifting restrictions on centrifuges, uranium enrichment and more. President Trump pulled the US out of the deal in 2018.

The Iraqi Parliament approved a resolution calling on the government to expel some 5,000 US troops from the country. President Trump said Sunday “we are not leaving unless they pay us back” for an air base in Iraq.

President DonaldTrump said Sunday that his administration “may discuss” releasing the intelligence on Soleimani.

Posted by Emmanuel Agbenonwossi on January 6, 2020. Filed under News, Zoom. You can follow any responses to this entry through the RSS 2.0. Both comments and pings are currently closed.