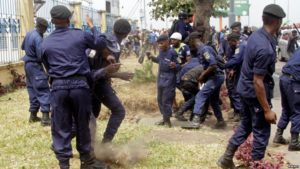 According to members of the opposition UDPS (Union for democracy and social progress), “the thirty-year-old biker was “killed by a soldier of the army because he was wearing a t-shirt bearing the image of President Tshisekedi.”

The head of the Kinshasa police, General Celestin Kanyama, confirmed that a soldier had shot a motorcyclist. Meanwhile, police spokesperson Colonel Ezekiel Mwanamputu said insisting on the biker’s clothes bearing the image of the UDPS logo and a picture of Tshisekedi is meant to politicize the incident.

Political tension is high in Congo, where opponents of President Joseph Kabila say he is trying to cling to power beyond the end of his mandate in 2016. More than 40 people were killed in violent protests over the issue last year.

Since then, authorities have arrested dozens of critics of Kabila. The United Nations and human rights groups say the arrests are conducted on trumped up charges.

Opposition groups called for the protests after the country’s Constitutional Court ruled two months ago that Kabila, in power since his father’s assassination in 2001, could remain in a caretaker capacity beyond the expiry of his second term in December.