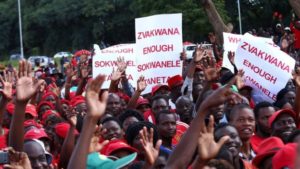 Speaking in his annual National Heroes Day speech, honoring guerrillas who died in the country’s war of independence in the 1970s, Zimbabwe’s President, 92-year old Robert Mugabe, asked those seeking political power to do so through the ballot box and not through violent demonstrations.

Over the years that he has been in power, Mugabe has been strongly criticized and blamed by the international community for crippling the development and economic advancement of Zimbabwe, which was previously referred to as the “bread basket of Africa”.

Over the last few weeks, the Southern African country has experienced escalating protests, which shook the Mugabe regime to its core.

Sporadic protests have broken out because of a severe shortage of cash.

‘‘If you want to remove the government, wait for elections, not violent demonstrations, that is what democracy dictates,” Mugabe said in his Monday speech.

He urged Zimbabweans to remain united in the face of challenges and to defend their national sovereignty. ‘‘We should remain united, remain cognizant of the fact that without unity we cannot make much progress,” the State run Herald news portal reported.

Zimbabwe is facing its worst financial crisis since it scrapped its national currency in 2009 and adopted the United States dollar.

The government is currently in talks with the International Monetary Fund to secure a $986 million loan.