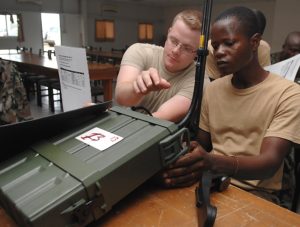 The United States has ended its six-year Operation Onward Liberty (OOL) mission in Liberia that targeted the training of the West African country’s armed forces to take over the country’s security after years of turmoil.

Operation Onward Liberty has been mentoring and advising the AFL in building a professional army that is answerable to civilian authority. OOL was officially chartered in 2010; and the personnel who formed that first mission built up a strong partnership with their Liberian counterparts in the newly formed Armed Forces of Liberia (AFL.)

According to the U.S. embassy in Liberia, the mission, including U.S. Marines, Army, Air Force and the National Guard, offered training from infantry to staff operations in the West African nation.

“The AFL has made great strides since its reconstitution in 2005 and is now a professional and capable force; in light of the progress achieved, OOL was able to successfully conclude its mission,” the embassy stated.

The United Nation Peace keeping mission in Liberia has also left the country last month. The task of ensuring proper security has been left to the country’s forces.

The United Nations military mission in Liberia was one of the longest and largest UN missions in sub-Saharan Africa and one of the most widely supported with 42 countries contributing military forces and 35 contributing police personnel.