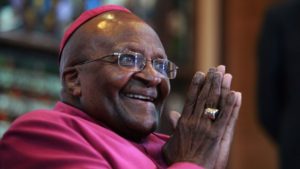 South African archbishop emeritus Desmond Tutu has been admitted to a Cape Town hospital as he is suffering from a persistent infection, his family said on Wednesday.

The statement issued late Wednesday said the 84-year-old is expected to remain in hospital for a week or two.

Tutu was first hospitalized for the infection on July 14. The Nobel Peace laureate also continues to battle prostate cancer, first diagnosed 20 years ago, but his family said the current infection was unrelated.

Tutu was hospitalized three times in 2015 over a persistent infection that his foundation – the Desmond & Leah Tutu Legacy Foundation – said was a result of the prostate cancer treatment he has been receiving.

Tutu survived an illness believed to be polio as a baby, and battled tuberculosis as a teenager. He has been in and out of hospital for minor complaints since 2011.

Under apartheid, Tutu campaigned against white minority rule and was awarded the 1984 Nobel peace prize for his work.

He played a key role in that nation’s transition from the apartheid era, including serving as chairman of the Truth and Reconciliation Commission.