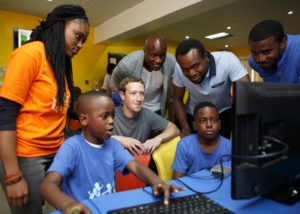 The founder and Chief Executive Officer of Facebook, Mark Zuckerberg arrived in Nigeria on Tuesday, part of a visit to several African countries to drive engagement on how to make Facebook better.

Zuckerberg who addressed entrepreneurs and software developers at the Co-Creation Hub in the Yaba neighborhood of Lagos said in a post on his Facebook page that “the energy here –Nigeria- is amazing and I’m excited to learn as much as I can.”

“Our first stop is the Co-creation Hub Nigeria (CcHUB) in Yaba. I got to talk to kids at a summer coding camp and entrepreneurs who come to CcHub to build and launch their apps. I’m looking forward to meeting more people here!” Zuckerberg told his 42-million followers on Facebook.

Facebook has a keen interest in Africa, which is seen by many as the new growth market as more and more consumers come online using mobile devices.