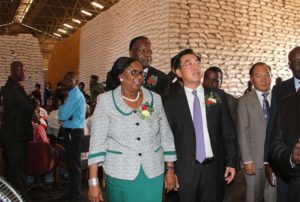 Chinese government has donated Zimbabwe 5,500 tons of rice to help alleviate hunger after a drought has left up to 4 million Zimbabweans in need of food aid.

“Today’s event again testifies the strong ties between China and Zimbabwe as all-weather partners, especially in the area of food security and agriculture,” the Chinese ambassador to Zimbabwe said while handing over the rice on Thursday.

Thursday’s donation is the first consignment of a total of 19,000 tons worth $24.6 million promised by the Chinese president Xi Jinping last December.

Last month, the Indian government through its ministry of external affairs has confirmed a $1 million grant to the southern African country.

The Asian giant also announced that logistical modalities are being worked out for the donation of 500 metric tons of rice in the second phase of assistance.

Reports indicate that close to four million Zimbabweans are malnourished as the country’s drought worsens. Farmers say they have lost cattle and crops and fear that things might soon get out of hand.

The failure of rains during the second season has been catastrophic as Zimbabwe struggles to recover from a recession which led to hyperinflation and shortages.