Protesters in the Democratic Republic of Congo (D 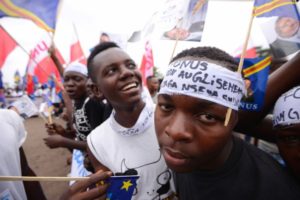 RC) are burning tyres and barricading roads in the capital Kinshasa on Monday, urging President Kabila to step down.

The move comes as the main opposition bloc in the central African nation has called its supporters for a day of general strike amid continued tension over slow preparations for the presidential elections.

The Presidential polls are supposed to take place in November, but the vote is set to be postponed due to outstanding issues, which are yet to be resolved, including updating the voter register.

Human Rights Watch has called on the authorities to respect people’s rights to freedom of expression and assembly.

Over the weekend, the Congolese police drove across the capital to present its new anti-riot arsenal and vehicles – a show of force the opposition claims was intended to discourage the local population from taking part in the strike.

In a new report titled ‘Dismantling dissent: DRC’s repression of expression amidst electoral delays’, released on Friday, Amnesty International said the DRC government is using state institutions to prevent people who oppose a prolongation of President Kabila’s term in office to organize and express themselves.

A national dialogue initiated by President Kabila started early September. However, the majority of opposition political parties declined to participate.