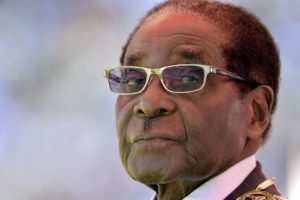 Botswana President Ian Khama on Wednesday said Robert Mugabe should accept the reality of his age and retire.

Mugabe should without delay exit the post of president of the southern African nation and allow new leadership because Zimbabwe’s political and economic implosion since 2000 is dragging down the whole of southern Africa, President Khama said.

“They have got plenty of people there who have got good leadership qualities who could take over. It is obvious that at his age and the state Zimbabwe is in, he’s not really able to provide the leadership that could get it out of its predicament,” Khama told Reuters.

Botswana is home only to an estimated 100,000 Zimbabweans – a fraction of the 3 million believed to be in South Africa – although this is still enough to strain public services in a nation of 2.3 million people.

Robert Mugabe has made pleas to the UN to lift sanctions imposed by western powers on Zimbabwe, saying that his country is being collectively punished for exercising “the right to sovereign independence.”

Mugabe who made the request during his address at the annual opening debate of the United Nations General Assembly, said “as a country, we are being collectively punished for exercising the one primordial principle enshrined in the United Nations charter, that of sovereign independence. We are being punished for doing what all other nations have done and do, that is possess, own their natural resources and listen to the basic interest of their people,” he said.

“I repeat my call to Britain, Europe and the United States and their allies to remove the illegal and unjustified sanctions against my country and its people. Let us all be bound by our commitments to Agenda 2030 in which we agreed to eschew sanctions in favor of dialogue.” Mugabe told delegates.