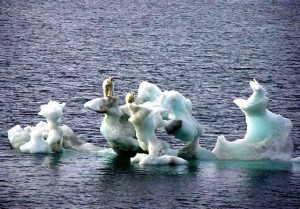 A new World Bank-commissioned report has warned that the Earth will incur serious risks by the end of the century if the global community fails to act on climate change and that the Mediterranean, and the MENA regions are among the parts of the world where the largest warming is to be expected.
The world is to heat up by 4°C degrees by the end of the century, triggering a cascade of cataclysmic changes that include extreme heat-waves, declining global food stocks and a sea-level rise affecting hundreds of millions of people, the new scientific report said, warning that all regions of the world would suffer but that the poor will suffer the most.
The report, titled “Turn Down The Heat: Why a 4°C Warmer World Must be Avoided” summarizes a range of direct and indirect climatic consequences under the current global path for greenhouse gas emissions.
The report, drafted by the Potsdam Institute for Climate Impact Research and Climate Analytics, says that the world is to be 4°C warmer by the end of this century and that current greenhouse gas emissions pledges will not reduce this by much.
According to the alarming document, the 4°C scenarios are potentially devastating as the warming will impact on agriculture, water resources, human health, biodiversity and ecosystems. This could lead to large-scale displacement of populations and consequences for human security and economic and trade systems.
Extreme heat waves, that without global warming would be expected to occur once in several hundred years, will be experienced during almost all summer months in many regions.  The effects would not be evenly distributed.  The largest warming would be expected to occur over land and range from 4° C to 10° C.  Increases of 6° C or more in average monthly summer temperatures would be expected in the Mediterranean, North Africa, Middle East and parts of the United States.
The report states that science is unequivocal that humans are the cause of global warming, and major changes are already being observed. The global mean temperature has continued to increase and is now about 0.8°C above pre-industrial levels.
While a global warming of 0.8°C may not seem large, the report notes that many climate change impacts have already started to emerge, and the shift from 0.8°C to 2.0°C warming or beyond will pose much larger challenges.  But a global mean temperature increase of 4°C approaches the known historic level of change for the planet, which harks back to the last ice age when much of central Europe and the northern United States were covered with kilometers of ice and global mean temperatures were about 4.5°C  to 7°C lower. And this contemporary human-induced climate change, the report notes, is occurring over a century, not millennia.
The report notes, however, that a 4°C world is not inevitable and that with sustained policy action warming can still be held below 2°C, which is the goal adopted by the international community and one that already brings some serious damages and risks to the environment and human populations.
According to a WB release, the Bretton Woods institution is helping 130 countries take action on climate change. Last year, it doubled its financial lending that contributes to adaptation. The Bank-administered $7.2 billion Climate Investment Funds are now operating in 48 countries, leveraging an additional $43 billion in clean investment.  Increasingly, the Bank is supporting action on the ground to finance the kind of projects that help the poor grow their way out of poverty, increase their resilience to climate change, and achieve emissions reductions.