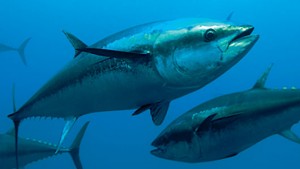 The member countries of the International Commission for the Conservation of Atlantic Tunas (ICCAT), the international body managing the fishery, decided to slightly raise fishing quotas in 2013 from the current 12,900 tons to 13,400 tons.
The decision was made by the 48 ICCAT member countries at the commission’s 18 special meeting held November 12 to 19 in southern Morocco.
The increase, the first in ten years, falls in line with the recommendations provided by the ICCAT Scientific Committee which advised against increasing quotas to unsustainable levels. Even if the committee reported recently a recovery of bluefin tuna in the Mediterranean/North Atlantic, it still called for maintaining the quota system to protect the devastated species and help it to rebuild.
The quotas will be reconsidered in 2014, although the scientific committee’s initial recommendation called for maintaining the quotas through 2022.
Several environment protection groups, including the World Wildlife Fund (WWF), hailed the decision that will help replenish the stocks and maintain the recovery at least during 2013.
“We encourage policy makers to continue to listen to science in the future. Only then will the East Atlantic and Mediterranean stock of Atlantic bluefin tuna have a chance to fully recover,” Dr Sergi Tudela, Head of Fisheries, WWF-Mediterranean, was quoted by the media as saying.
“The 2012 meeting was a real test of the ICCAT members’ commitment to the conservation of the bluefin tuna. We are pleased that respect for science has finally been imposed, with the EU at the forefront, in the fight against short term benefits by setting unsustainable fishing levels,” he said.
Despite the quotas system, a recent study conducted at the initiative of the WWF revealed that between 2000 and 2010, the equivalent of 18,704 tons of live bluefin tuna, were traded via Panama, without being reported to the ICCAT.
According to the study, whose findings were released last October, the rules in force during all the study period, requiring that any international trade of Atlantic bluefin tuna needs to be duly reported, to enable cross-checking with catch quotas, were not respected.
According to ICCAT, illegal, unreported and unregulated activities in the bluefin tuna fishery peaked in 2007 with an estimated catch at 61,000 tons, worth more than twice the legal quotas. There is consensus that recent catches have significantly reduced, but strong doubts still exist as to the real amount of fish being caught, ICCAT had said.