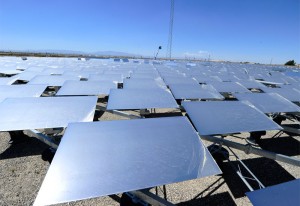 The announcement of a 15-megawatt solar power project in Nouakchott has been announced by Masdar. The project will satisfy 10% of the country’s electricity capacity and will provide an annual demand growth in the country, estimated to be at a rate of 12% in 2012.
Mauritania has abundant renewable resources in the form of both solar and wind which remain untapped despite suffering from severe power shortages as still continues to use an installed grid capacity of just 144 megawatts, supplied mostly by diesel generators. The country also has a low electrification rate of 60%.
If the country invests only into wind energy, it can generate almost more than four times its annual energy demand. The government is conscious of its potentials. It’s Minister of Petroleum, Energy and Mines Taleb Ould Abdivall said “Mauritania has some of the highest levels of solar radiation in the world, making it an ideal place for solar power installations.” He said they are pleased to have Masdar in the project describing the company as esteemed partners whose personnel have gathered a vast and worldwide experience in the renewable energy sector. He hoped that they will remain to be work as partners in future projects.
The megawatt solar power project is the first utility-scale solar power installation in the country and it is part of Masdar’s commitment to the United Nations’ Year of Sustainable Energy for All. The project is located close to the university in the capital and upon completion, it will be used as learning laboratory for solar energy development in the country and will be owned and operated by the state owned Société Mauritanienne de l’électricité (SOMELEC).