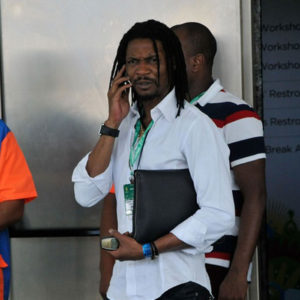 Cameroon soccer legend and former captain of the Indomitable Lions Rigobert Song Bahanag has come out of a two-day severe stroke and will be flown to France for treatment.

The former West Ham and Liverpool footballer has come out of his coma and the oxygen has been disconnected, Dr Louis Joss Bitang A Mafok, director of the Yaoundé hospital’s emergency centre said on Tuesday.

“His high blood pressure has returned to normal and the cerebral hemorrhage has been controlled,” the doctor said.

He also announced that a plane would be arriving from France to transfer Song on Tuesday.

“A medical aircraft will be in Cameroon on Tuesday, we will have a working session with the French team and then he will be flown to France,” he explained.

The 40-year-old Song whose nephew is ex-Arsenal midfielder Alex Song, is a super star in his home country of Cameroon, having captained the national team.

The father of 4 became the first African player to feature at four World Cup competitions; in 1994, 1998, 2002, and 2010 when he retired from international football.

Cameroonians have flooded social media sites with wishes of quick recovery to the emblematic footballer.