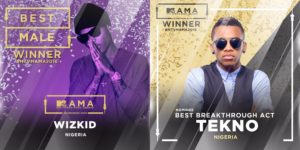 Wizkid who gained popularity in the early 2010 with the song “Holla at Your Boy” from his debut album has won the hearts of Africa in the past year with hit songs and much collaboration.

The 26-year-old artist’s song “Soweto Baby” which won Best Collaboration on the night was produced by South African DJ Maphorisa.

Nigeria, Africa’s most populous nation has one of the fastest-growing markets in the entertainment and media industry according to PricewaterhouseCoopers (PwC) in its 2016 to 2020 Entertainment and Media Outlook report for South Africa, Nigeria and Kenya.

Weeks ago, a number of Nigerian artists were among an all-star line-up at the One Africa Music Fest in the US.

Wizkid and Davido have international deals with Sony, and Tiwa Savage has signed a deal with Jay Z’s Roc Nation.