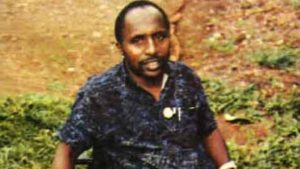 Rwanda’s ex-spy chief, Pascal Simbikangwa, who was first convicted in France in 2014 is once again facing justice in an appeal case in Paris.

Simbikangwa, 54, who rose to be third in command in Rwanda’s intelligence services, was arrested in 2008 while living under an alias on the French Indian Ocean island of Mayotte.

He was specifically accused of inciting, organizing and aiding massacres, particularly by supplying arms and instructions to Hutu militia who were manning road blocks and killing Tutsi men, women and children.

He is the first man to be convicted in France in connection with the genocide in Rwanda 20 years ago.

Some 800,000 people – mostly ethnic Tutsis and moderate Hutus – were killed over a period of about 100 days.

“Simbikangwa is the first accused in the Rwandan genocide to be judged in France, because his sentencing is not yet certain, I use the word accused. Therefore it is a particularly important case which must remain exemplary,” lawyer for the civil party, Barrister Patrick Baudouin said.

This trial is really important that defenders of the victims expect nothing less than the verdict of the first judgement.

“Obviously, we hope, I am not hiding anything. Even if it is not the role of the civil society to request, we hope for a conviction or even the confirmation of the judgement of the court of First Instance which we believe was handed down in strict respect of equity,” Barrister Baudouin added.