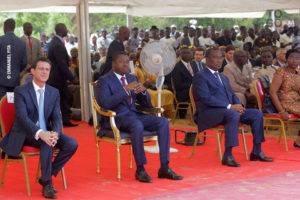 French Prime Minister Manuel Valls over the weekend toured Togo, Ghana and Cote d’Ivoire to reassure countries that “have felt forgotten” by France over the past few years, support democratic change and strengthen trade ties.

In Togo, Manuel Valls who conferred with the Togolese President Faure Gnassingbé said, “Togo is changing, and, even if the challenges are there – I’m thinking of the rule of law, institutional reform where progress is still needed – it is changing in the right direction.”

According to the government official website –republicoftogo.com, the French Prime Minister had detailed discussions with Togolese authorities on ways to reinforce cooperation between France and Togo.

When he arrived in Ghana on Saturday, Manuel Valls said Ghana and France have had great relations in many areas especially in economic relations with many French businesses investing in the country.

France’s relationship with Francophone Africa is not an exclusive relationship and as such they have to develop ties with Portuguese Africa and Anglophone Africa, he said, adding that these notions are no longer relevant anymore.

According to him, French companies have everything to support future initiatives in a country where almost 40% of the population is under the age of 20.

“We need to identify future projects, position France as one of the main donors of Ghana. There – to sum things up – a business field for businesses, for larger companies to present, for SMEs in the field of telephony, in capital goods and consumer goods to flourish,” he said.

Valls also proposed to create a Euro-African Erasmus-type program – which he said will allow young Africans and young Europeans study in each other’s countries and exchange ideas.