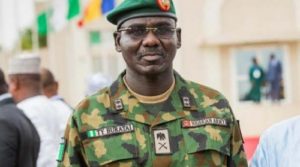 Nigeria’s Chief of Army Staff, Lt. Gen. Yusuf Tukur Buratai, on Wednesday told the Special Representative of the UN Secretary-General, Mohammed Ibn Chambas that 60 per cent of Boko Haram fighters are not Nigerians.
Mr. Buratai who was speaking in Maiduguri, capital of Borno State – the heartland of the Boko Haram insurgency, disclosed that while Boko Haram can be said to have started in Nigeria, almost 60 per cent of the insurgents are from our neighbouring countries.
“You can see that almost all of the recently surrendered insurgents are not Nigerians,” Buratai said.
Over 1,000 Chadians who are believed to have been fighting for Boko Haram have returned home last week.
The Lac-Tchad region authorities told local media that the fighters, among them women and children, surrendered over a period of two months.
Defections of Boko Haram fighters have been reported in Nigeria but are not known to have previously occurred on such a large scale.
The Multinational Joint Task Force (MNJTF) headquartered in Chad, with troops from Chad, Niger, Nigeria, Cameroon and Benin and intelligence, training and logistical support from the United States, launched a regional operation in July against the group, which has pledged allegiance to Islamic State.