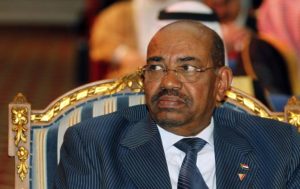 Sudanese President Omar al-Bashir is reported to have described the neighbouring South Sudan government as an ‘enemy’ to his country in an address to Sudanese Intelligence officers over the past weekend, local Radio Tamazuj reports.
According to Radio Tamazuj, Bashir told Sudanese Intelligence officers that the neighbouring South Sudan was still targeting Sudan and that it does want to implement the 2012 Joint Cooperation Agreements signed by the two countries.
Bashir further stressed that any peace agreement signed with the Sudan People’s Liberation Movement-North (SPLM-North) would not include the integration of its fighters in the Sudanese Armed Forces (SAF) (SAF), saying the SPLA-North rebels are still part of South Sudan army.
Sudan regularly accuses its neighbour of backing insurgents in the Darfur, Blue Nile and South Kordofan regions that run along its southern border.
“Those who are in Blue Nile are still part of the SPLA, and those who are still in South Kordofan are still part of the SPLA which is South Sudan’s army,” he said.
“They were supposed to be given their rights and then hand over their guns so that they come to us with their hands, but they didn’t do so. They want us to negotiate with them, but there will not be any integration of rebels,” he added.
Bashir has been threatened to close its border with South Sudan if authorities in the South did not expel groups opposed to Sudanese authorities.
As a reminder, South Sudan split away from Sudan in 2011 after decades of civil war fuelled by ethnic divides and disputes over oil.
The border, regularly crossed by traders and pastoralists, was closed after the 2011 split and only re-opened last January.