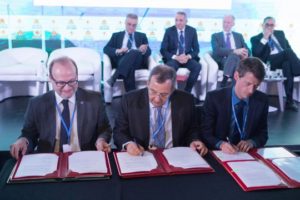 Sustainable development and energy transformation were front and center at the energy day which kicked off in the Moroccan pavilion in COP22 Blue zone.
With tangible actions manifested in the signing of several financing agreements concerning sustainable development and energy transformation projects, Morocco expresses its commitment to clean energy and sustainability.
In this respect, several agreements were signed providing for funding projects in the field of wastewater treatment, energy efficiency and the promotion of renewable energies in Africa as well as training in solar energy technologies.
Worth 594 million dirhams, the first agreement was sealed by the national electricity and water utility (ONEE), the French Development Agency (AFD) and the German development bank (KfW). This agreement provides for carrying out investments in the field of upgrading the wastewater treatment network in 30 municipalities. It also aims at providing technical assistance in addition to supporting the implementation of communication and awareness raising campaigns in the field of hygiene and environmental protection.
On the same occasion, the ONEE and the Islamic Development Bank (IDB) signed a Memorandum of Understanding to provide support to renewable energy projects in Sub Saharan Africa with a view to increasing rural electrification.
In order to promote energy efficiency in buildings and public lighting, a Memorandum of Understanding was signed between the ONEE, the Caisse de Dépôt et de Gestion (CDG), the Moroccan agency for energy efficiency (AMEE) and the KfW. In the same vein, another Memorandum of Understanding was signed by the Energy, Mining, Water and Environment Ministry, the Moroccan Energy Federation and the Mediterranean Energy Observatory.
For their parts, Nova Energie, Green of Africa, Risen Energy and China Railway Construction Company have signed an agreement providing for setting up an integrated solar photovoltaic project comprised of assembly units and a 45 megawatts power plant with the possibility to be boosted to 100 megawatts. Under the same agreement, a higher institute will be established with the task to train technicians on solar energy technologies.
In the field of wind energy, an agreement was signed by Green of Africa and Voltalia Morocco providing for the setting up of a high voltage project in the province of Laayoune.
In the same southern province, the two companies inked an agreement to jointly launch a medium voltage wind energy project in the rural commune of Foum El Ouad.
Speaking on this occasion, Moulay Hafid Elalamy, Minister of Industry, Trade, Investments and Digital Economy, underscored Morocco’s commitment on the path of energy transformation and carbon neutrality.
“Morocco’s energy transition was bolstered in December 2015 following the momentum added by HM king Mohammed VI, who announced at COP21 the ambition to increase the share of renewables from 42% in 2020 to 52% in 2030,” said Elalamy.
He added that the success of the Moroccan energy transformation model is the result of «political willingness» and «realistic and measurable energy strategy.»
This side event was notably attended by French Environment Minister, Ségolène Royal, German State Secretary for Energy, Rainer Baake and Portuguese State Secretary Jorge Seguro Sanches