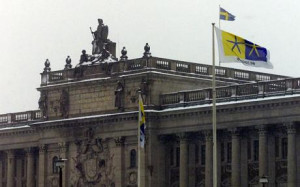 Sweden does not intend to recognize the Saharan Republic, known by its French acronym as SADR, announced Thursday the Swedish Ministry of Foreign Affairs.
“The Government of Sweden has no intention to recognize the SADR,” the Spokesman for the Foreign Ministry, Andres Jorle, told the media.
Sweden considers that the SADR does not meet the necessary requirements to be recognized as a state, the Swedish official said.
“Sweden’s traditional position regarding the recognition of new countries is based on international criteria: there must be independence, integration and autonomy.. The territory must be controlled by the government, and the population must be under its control as well,” the spokesperson underscored.
The Swedish foreign department made the clarification after some opposition parties included, in a report on the situation in the Middle East and North Africa (MENA), a motion calling on Stockholm to recognize the SADR. In the report that was adopted Wednesday by the Parliament, the Swedish government expressed reservations about the motion, deeming that the SADR recognition needs to be approached within the framework of international law.
Andres Jorle has, on the other hand, reiterated his country’s support to the process initiated under the auspices of the United Nations to find a political solution to the dispute.
The motion, proposed by three leftist opposition parties, was supported by a far-right party, the Sweden Democrats, known for its anti-immigrants and anti-Islam stands. The four parties of the center-right participating in the ruling government voted against the text.
Several Swedish MPs have minimized the impact of the motion and rejected it as unconstitutional since its authors want to interfere with the powers of the government.
Moderate MP Ulrik Nilsson who shares this standpoint said the opposition parties tabled the motion for political reasons and to put pressure on the government on some internal issues that have nothing to do with the Sahara.
Mehmet Kaplan, leader of the Green Party group in the Swedish parliament, on his part said that the Parliamentary motion is not binding on the government, which is constitutionally the only authority fully responsible for the country’s foreign policy.
The motion calling for the recognition of the SADR has no impact whatsoever on the government’s position, commented another Swedish MP, Desiree Pethrus from the Christian Democratic Party.
Recognition of foreign states is clearly of the government’s responsibility, as stipulated by the Swedish Constitution, said Ms. Pethrus, whose party is participating in the coalition government.
She insisted that recognizing the SADR by the ruling coalition is just impossible.
Many Swedish MPs have also urged their government to continue to support the UN efforts seeking to settle the Western Sahara issue and stressed the need to give the UN time to find a solution through dialogue and mediation.