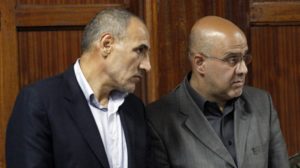 Two Iranians and their Kenyan driver, who worked for the Iranian embassy in Nairobi, have been arrested and charged on Thursday with collecting information for a terrorist act after filming the Israeli embassy in the country.

According to a charge sheet produced in court, Sayed Nasrollah Ebrahimi, Abdolhosein Ghola Safafe and driver Moses Keyah Mmboga “were found taking video clips of the Israeli embassy … for the use in the commission of a terrorist act.”

The driver separately faced a count of aiding a terrorist offence in which the prosecution alleged that he drove the two Iranians in a vehicle belonging to Iranians Embassy who took a video clip of the Embassy.

The three were detained in Nairobi on Tuesday. They had been visiting Kamiti Prison earlier in the day to meet with two other Iranians who have spent 15 years imprisoned on terrorism charges, the Time of Israel reported.

Milimani Senior Principal Magistrate Joyce Gadani remanded the three suspects until December 6 when the court will rule on whether they will be released on bail pending trial. The magistrate noted that the two foreigners do not enjoy diplomatic immunity as their lawyers had alleged.